Everything You Need to Know About Udon Thani

Many biggest provinces in Thailand by size are in the north-eastern part of Thailand and Udon Thani is one of them. The province is like a logistic and tourism hub of the region and is important History-wise regarding the famous Ban Chiang source of prehistory civilization, one of the oldest civilization in the world.

Udon Thani is also famous for its natural tourist attractions and local products like Pha Khid or patterned silk weaving. Local communities are also very charming with simple way of living. Accommodations are also easy to in the city so you can be sure there is minimal fuzz in your visit plan to Udon Thani Thailand.

Udon Thani, located in Thailand’s northeastern Isan region is a prime business center, particularly as a result of its proximity to Vientiane, the capital of Lao P.D.R.

Udon Thani is probably best known for its Archaeological wonders, paramount among them the hamlet of Ban Chiang where the world's first Bronze Age civilization is believed to have flourished more than 5,000 years ago.

Udon Thani borders Nong Khai to the north, Khon Kaen to the south, Sakon Nakhon to the east and Nong Bua Lam Phu and Loei to the west. Consequently, Udon Thani is a major transportation hub for Northeastern Thailand.

Geographically, the province is located on a plateau which is approximately 187 meters above Sea level. Most of the area is covered with rice fields, forests, and hills; the Phu Pan mountain range and the Songkhram River are the provinces two primary natural attractions.

The inhabitants of Udon Thani are mainly engaged in agricultural activities, and the capital city is a major agricultural market center for its neighboring provinces.

Udon Thani is a large province that serves as a center of transportation, trade, and tourism in the Northeast of Thailand. The province is a land of forest temples and a gateway to Laos. Udon Thani also possesses an Archaeological Site that is evidence of one of the world’s most ancient bronze-age civilizations. It is a province blessed with natural tourist attractions and is well known for its Khit-style textiles. 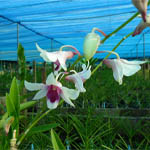